The
District Municipality of Fezile Dabi has kick-started “Tourism Awareness
Campaign” in an attempt to revive tourism industry in the Northern part of the
Free State Province.

As
tourism is viewed as one of the significant driver of South African economy
with its contribution to the economy and
job creation, the Fezile Dabi District Municipality has turned to this
sector to rebuild its economy that has been knocked heavily by the scourge of
Covid-19.

Tourism
in its definition encompasses the activities of persons traveling to and
remaining in places outside the usual environment for not more than one
consecutive year for leisure, business and purposes other than being employed
in the place visited.

Last week the Acting Executive Mayor Cllr Puleng Modikoe, together with directors form various departments including Local Economic Development and Tourism, took the municipality’s tourism awareness campaign to the N3 highway at the Wilge Plaza in Villiers in the Mafube Local Municipality. The campaign targetted amongst others, young people of all races who impulsively go away for short breaks with friends, high life enthusiasts who travel to boost their social status and seasoned leisure travelers. 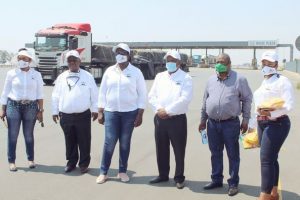 Kick-starting the campaign Modikoe said they have targeted the N3 highway as it links variousprovinces while cutting through the district of Fezile Dabi.

“This
highway links various provinces including our own as well as our district, with
this campaign here we are hoping to reach as many travelers and passing by
drivers and passengers and to make them aware of the tourism attractions that
we have in this district,” she said, “Our economy has been negatively affected
by the Covid-19 pandemic and with this campaign we are trying to rebuild our
tourism sector as we encourage travelers passing through our municipality to
visit various tourism destinations in our district.”

The
Lion Route which passes through the district is known for activities such as
cape wine tasting, gliding, hiking and the famous Deneysville Inland Riviera.

The
Vaal River and the Vaal Dam are some of the main features in the district
including the third largest Meteorite site in the world, the Vredefort Dome.
Within its four municipalities the district offers many tourism features
including wind surfing, water skiing, Fishing, hiking, bird watching, historic
sites and game and nature reserves.